The Institute for Plastination is a private company that Gunther von Hagens founded in 1993 to continue the technology he had developed at Heidelberg University. It is the administrator of the body donation program for plastination. From the very beginning, the aim of the Institute has been to further develop plastination techniques and to improve anatomical teaching by producing high-quality and didactically high-quality preparations for teaching at universities and other recognized teaching institutions.
Since 1995, the IfP has also organized the BODY WORLDS exhibitions. The conception and global coordination of these exhibitions is now under the direction of Dr. Angelina Whalley and has become one of the main tasks of the IfP. Dr. Whalley has been the Executive Director of the IfP since 1997.

Gubener Plastinate GmbH is another privately run entity founded by Dr. Gunther von Hagens in 2006. It’s headquarters is in Guben, Brandenburg, Germany and the company cooperates closely with the Heidelberg based Institute for Plastination. It is the largest plastination center in the world. At present, Guben is the only location where we routinely create plastinates. Therefore, a majority of the IfP body donations are transferred from Heidelberg or sent directly to Guben for plastination.

In recent years, Gunther von Hagens withdrew from an active role in the business, due to the progression of his Parkinson’s disease. He has since appointed his son, Rurik von Hagens to handle the management duties of of Gubener Plastinate GmbH.

Gubener Plastinate GmbH is home to a large, publicly accessible area, known as the PLASTINARIUM. Visitors are invited to watch employees at work during the anatomical preparation of plastinates and follow their creation. In addition, the PLASTINARIUM has a large collection of historic and newly created anatomical preparations, and a learning workshop in which students, healthcare professionals and other interested parties can deepen their anatomical knowledge in self-study using the plastinates, models, panels, computers and a multi-media library. More and more often, students from abroad, e.g. from the USA, are regularly taking advantage of the offerings onsite to advance their studies. You can find more information about the PLASTINARIUM at: www.plastinarium.de.

BODY WORLDS is a series of traveling exhibitions that have existed since 1995. The exhibitions present plastinated anatomical specimens for the public. They are designed as a place of enlightenment, in which anyone interested can gain authentic knowledge into the inside of the body. People can study real human bodies and discover their own in whole a new way. For many visitors, this becomes a touching experience that makes them contemplate all facets of their own life. The exhibition sharpens the sense of one’s own vulnerability and one’s own health. A recurring motto in BODY WORLDS is “We can only appreciate and protect what we know.” You can find more information about BODY WORLDS at: www.bodyworlds.com

MEET THE PEOPLE BEHIND OUR WORK

DIRECTOR OF THE IFP AND CURATOR OF BODY WORLDS 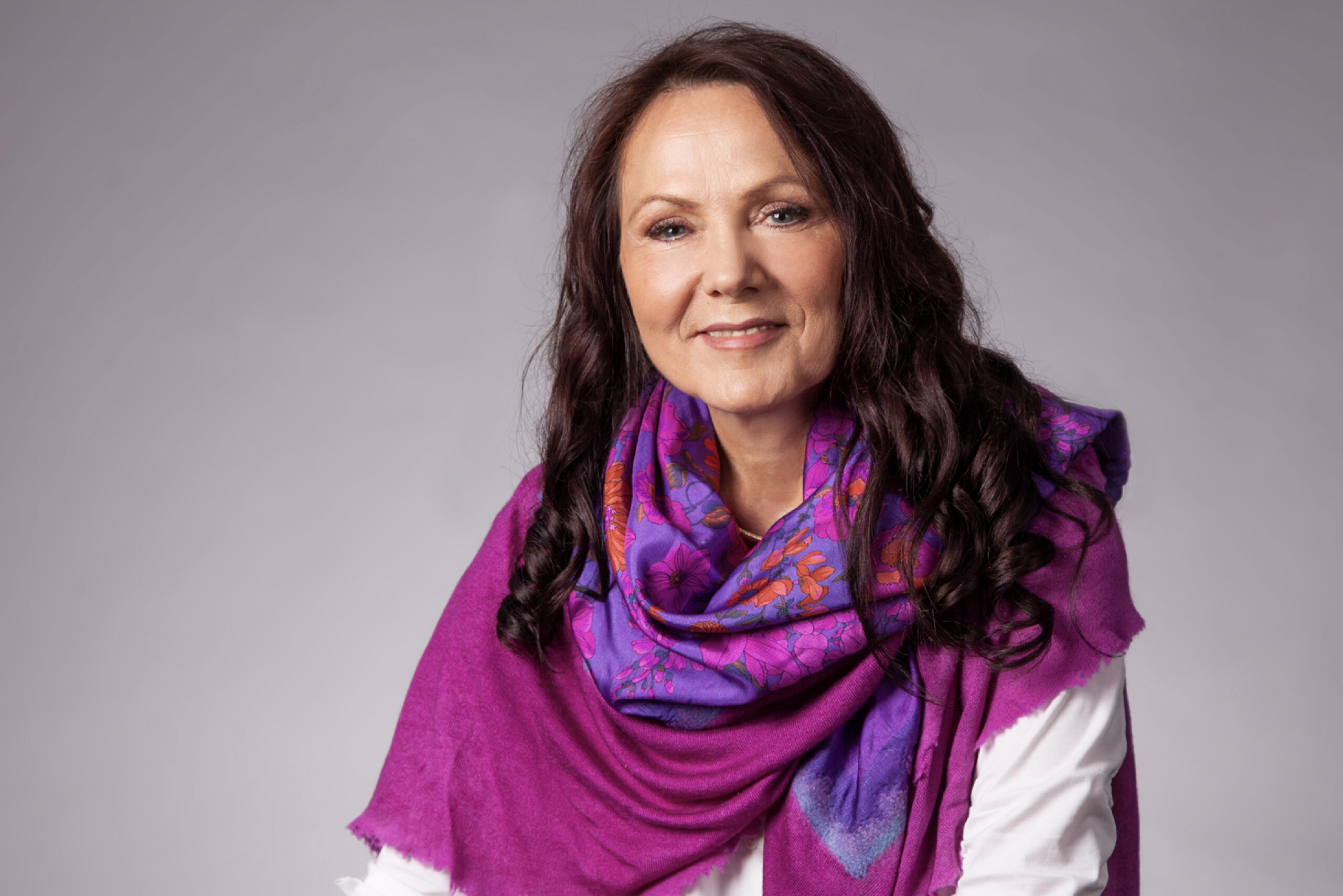 Dr. Angelina Whalley has been Director of the Institute for Plastination since 1997. She first studied at Freie University in Berlin and later at the University of Heidelberg, where she received her doctorate in 1986, with an experimental work on kidney physiology. She then worked for several years at the Institute of Anatomy and the Institute of Pathology at the University of Heidelberg until she took over the management of the IfP from her husband, Dr. Gunther von Hagens, in 1997. At the same time, she began to manage BIODUR® Products, a company that sells special plastics and devices for plastination to more than 400 medical schools and universities around the world. In 2003 she founded Arts & Sciences Exhibitions and Publishing GmbH, which organizes scientific touring exhibitions worldwide and is the publisher of exhibition-related materials. Dr. Whalley is the author of several successful books and exhibition catalogues, and a producer of exhibition-related documentaries.

In addition to her administrative tasks, she continues to shape and transform the design of BODY WORLDS. As a curator, she conceptualized and designed the exhibitions focused on humans and animals. Through her popular scientific approach, BODY WORLDS, has made complex medical issues accessible to a broad lay audience of more than 50 million and inspired people worldwide to lead a healthier life and to be more mindful of their own bodies. With the first exhibition of plastinated animals, BODY WORLDS of Animals (also known as ANIMAL INSIDE OUT), she succeeded in creating an impressive symbiosis of anatomy, didactics and scenic representation, with which she sharpened the viewer’s sense of life and the wonders of nature.

INVENTOR OF PLASTINATION AND CREATOR OF BODY WORLDS

As a physician and anatomist, Dr. Gunther von Hagens invented plastination, with which he revolutionized anatomical education and made health education accessible to a broad lay audience.

He began his medical studies in 1965 at the University of Jena. After failing to flee from East Germany, he became a political prisoner of the GDR in 1968. His freedom was bought by the Federal Republic of Germany in 1970 and he then continued his studies in Lübeck, where he received his license to practice medicine in 1973. He then completed his doctorate in the Department of Anesthesia and Emergency Medicine at the University of Heidelberg. In 1975 he transferred to the Anatomical Institute of Heidelberg University, where he worked for many years as a lecturer and scientific assistant.

As part of his research work there, he invented plastination in 1977, a vacuum technique for the long-term preservation of anatomical preparations with reaction plastics specially developed for this purpose. Soon after, he founded BIODUR® Products, to enable other teaching institutions to use plastination. BIODUR® sells plastics and devices he has developed specifically for plastination. In 1993 he established the privately run Institute for Plastination, which opened new dimensions in the further development of his invention.

Together with Dr. Angelina Whalley, his wife, the first BODY WORLDS exhibition in which plastinates were presented to the public in 1995. BODY WORLDS of Animals (Animal Inside Out) followed in 2010. To date, his anatomical works have been experienced by more than 50 million people.

In 2006, Gunther von Hagens founded Gubener Plastinate GmbH and, the PLASTINARIUM, set up as the world’s largest center for plastination of humans and animals in Guben, Brandenburg.

The Association of Science-Technology Centers (ASTC) honored him in 2013 for his lifetime achievement and his outstanding contribution to communicating science to a lay audience.

In recent years, due to the progression of hisParkinson’s disease, Dr. von Hagens has largely withdrawn from the public. 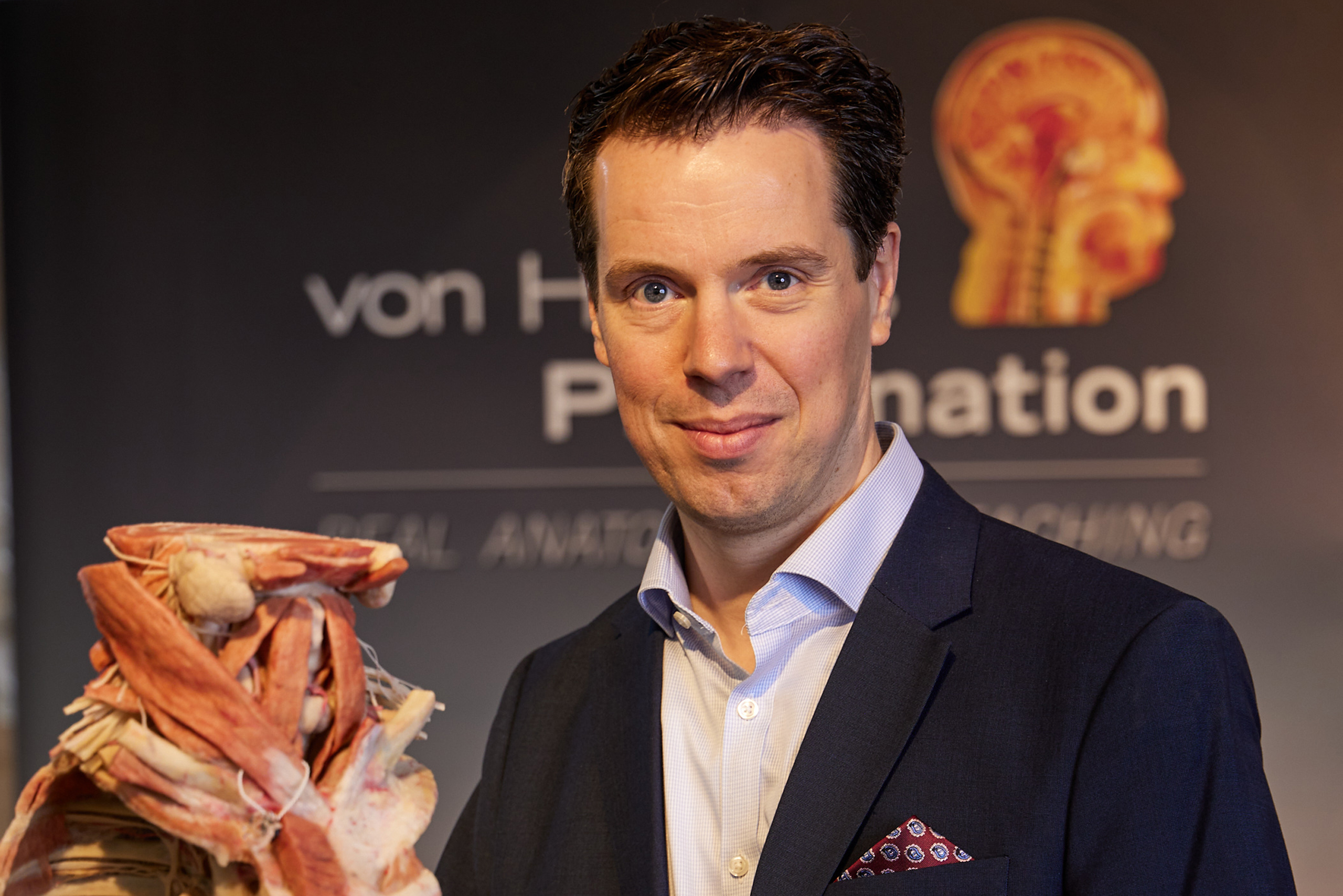 Rurik von Hagens has been Commercial Director of the Institute for Plastination since 2011 and Managing Director of Gubener Plastinate GmbH since 2012.

As the son of Dr. Gunther von Hagens, he grew up with plastination. He gained practical experience in anatomical preparation and plastination as a student when he completed laboratory internships at the IfP. However, he developed a much greater interest and passion for the organization of the BODY WORLDS exhibitions and the associated processes and operations.

Rurik von Hagens studied business administration at the University of Bamberg and the Aston Business School in Birmingham, UK from 2000 to 2005. He holds a degree in business administration and a European Master of Business Science. After graduating, he worked several years for an international group, where he was ultimately responsible for setting up sales activities in Asian countries. This experience was a welcome asset when he decided to join the family business full-time and he was easily able to take over the management of Gubener Plastinate GmbH from his father, who was suffering from Parkinson’s disease.

The distribution and creation of plastinates for teaching purposes, was in the start-up phase and operating at a high deficit at the time when Rurik entered the company. His first focus was stabilizing the company. He intensified efforts to draw attention to the possibilities and advantages of plastinates in professional circles, and as a result more and more universities and teaching institutions are using preparations made in Guben for their medical training. Rurik von Hagens is committed to taking the mission of BODY WORLDS creators, Drs. Gunther von Hagens and Angelina Whalley into the future.

HOW ARE THE IFP AND GUBENER PLASTINATE GMBH FINANCED?

The IfP and Gubener Plastinate GmbH with the affiliated PLASTINARIUM are privately organized research institutions that do not receive any public funds or research grants. They finance themselves primarily from the income from the BODY WORLDS exhibition and the sale of preparations to universities and other educational institutions. Very occasionally, the IfP also receives donations from the estate of deceased body donors, if they no longer have any relatives, for example.

We produce preparations of human origin solely for teaching, research and educational purposes and only sell them to “qualified users”, but not to private individuals. By “qualified” we mean:
Legal or natural persons who only want to use plastinates of human origin for the purpose of research, teaching or medical, diagnostic or therapeutic professional practice and can prove this. This includes teaching institutions such as universities, hospitals, schools and museums as well as general practitioners, university teachers, lecturers and other people who are involved in carrying out relevant research projects.

DONATIONS TO THE ADVANCEMENT OF PLASTINATION AND OTHER ESTATES

In the past, individual body donors have repeatedly approached us because they no longer have any surviving dependents and therefore want to name the IfP as the recipient of their estate. Others are so fascinated by plastination that they would like to support the further development of this technology with monetary donations.
The Deutsche Gesellschaft zur Förderung der Plastination e.V. (German Society for the Promotion of Plastination) was created to provide the opportunity to make donations or testamentary bequests to efforts in plastination. The association is a registered non-profit association; and funds flow exclusively into the promotion and further development of plastination.

This site is registered on wpml.org as a development site.